Jade is a serious athlete and a college
junior who deals with her problems
by running from them….literally.

Hey everybody. Solangel here and I bet you didn’t know that I was an aspiring filmmaker. I am a part of a startup production group at Georgia State University and we call ourselves Good Robot. 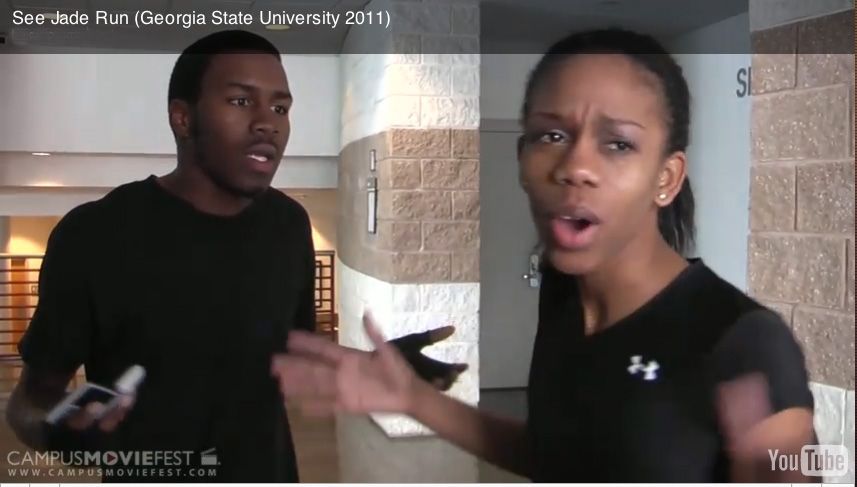 Recently, I co-directed, wrote and cast our second project, “See Jade Run.” I cast earthSista Kirei Na as the star, Jade. And we had a really great time producing this experimental little drama. We did this for the Campus MovieFest, The World’s Largest Student Film Festival and a couple of the guidelines were that it had be under five minutes and we had to do it in a week.

Now that you have seen it here, I want you to click on this link to the film on the Campus MovieFest website so that it can be included in the selected works for the screening at Georgia State U which will be held on Tuesday, February 15 and it is free and open to the public. For more details click here.

Check it out and tell me what you think.

Campus MovieFest (CMF) is the premier outlet for the next generation of filmmakers. CMF began nearly ten years ago when four students at Emory University provided students with everything they needed — including camcorders and Apple laptops — to make movies in one week. Since then, more than 250,000 students have told their stories on the big screen, receiving all the necessary technology and training for free thanks to corporate partners and schools. Additional information and thousands of CMF films are available online at campusmoviefest.com.