Michelle Obama Challenges Serena at the US Open! 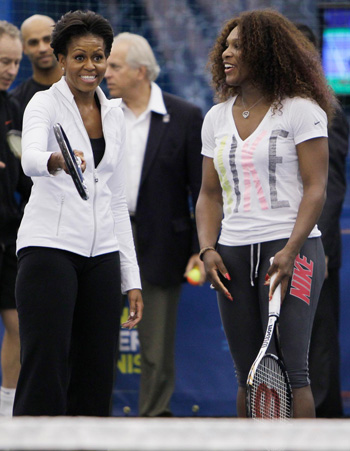 First Lady Michelle Obama arrived at the U.S. Open with one mission: to get city kids moving.

She started the morning in the SmashZone, the premier fan interactive attraction at the Billie Jean King National Tennis Center in Flushing on Friday, September 9. There, the First Lady played some 10 and under tennis with a group of kids from the Harlem Junior Tennis and Education Program along with tennis superstars Serena Williams, Billie Jean King, John McEnroe, James Blake and Katrina Adams and Mal Washington.

All gathered to join Obama in her Let’s Move! initiative, which combats childhood obesity.

“I am so incredibly excited to finally be at my first U.S. Open, but I am equally excited and proud to be standing in partnership with the USTA and all they have done for hundreds of thousands of kids across this country,” said Obama. “You are an example of what we can do when we put our minds to it.”

The First Lady told the future star athletes that tennis wasn’t a popular sport on Chicago’s Southside, where she grew up, and that she didn’t start playing until after earning her law degree at Harvard. But once she picked up the racquet, she quickly developed a passion for the game – a passion she has since passed on to her daughters, Malia and Sasha. 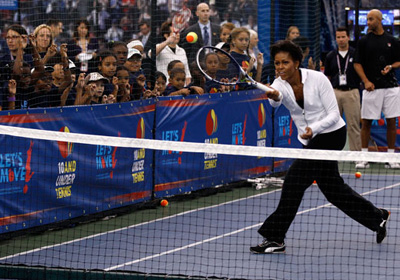 “[Tennis] is the kind of thing that is great for kids because it gets you moving, it keeps you focused. You get to move your muscles, you have to be quick, you have to be strong,” she said. “It gets your heart pumping, but it is a sport you can do forever. I know people in their 90s who are still playing tennis. And I want to be one of those people, I want my daughters to be some of those people, and I want all kids around the country to have access to opportunities and get exposure to sports like tennis so you guys figure out what your loves are.”

After making her rounds at all the different activities in the SmashZone, the First Lady showed off her tennis skills, teaming up with some kids in spirited matches against John McEnroe and then Katrina Adams.

After those matches, unscheduled guest Serena Williams surprised the crowd of kids and sidled up with a young tennis partner opposite Obama for a few intense minutes of on-the-court action. 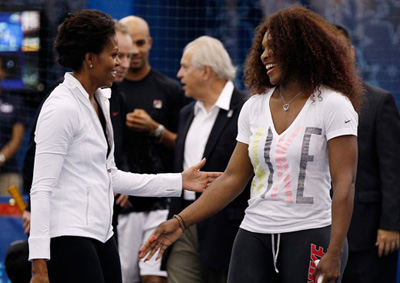 “They [the USTA] will make tennis accessible to kids like me who do not have access to the larger courts, and it will also help the sport become approachable for kids,” said the First Lady. “These courts give you the skills and introduce you to the sport at your level so you can learn to love it and then graduate up to the bigger courts. I think this is just phenomenal.”