Or will it?  Today, I checked my and the hubby’s voter registration, since I found out it was the last day to register in Georgia before the upcoming elections on November 2.  (By the way, if you live in Georgia, you can find your polling station, change your address, and check your status at the Secretary of State’s My Voter Page).  Sigh of relief: everything looked fine.

My co-worker passed by my desk and asked me what I was doing.  A puzzled look crossed her face when I pointed out .

“Um, there are elections coming up?  What for?”

I wanted to blurt out, “Everything!” but settled for the highest profile position up for grabs in our state.  “Governor!  Come on, I need you to know this stuff.” 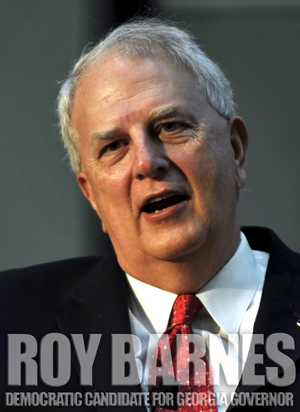 “When are they?”  she asked.  I blinked at her, then calmly explained to a 30 year-old what day elections always fall on in the United States.

“Oh.  Governor, huh?  Who’s running?  Isn’t it just old white men?”  I told her the candidates, and she screwed up her nose.  “Roy Barnes is a douche.  That’s why I don’t vote.  It’s always crusty old white men running.  We need a black man as governor.”  She made another face.

“No,” I said, “we need somebody competent in office.”

Did I mention that my co-worker is white?

Talking to Vince on the phone the other day–well, he was doing most of the talking, passionately rallying for the Democrats to put their money where their mouths are before the Republicans hand them back their change–I realized that not everybody is gung ho about the impending mid-term elections. 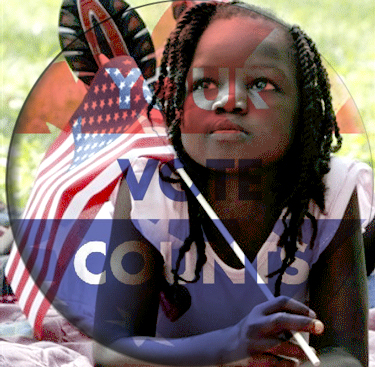 Me, included. Full disclosure: I only remember that Roy Barnes is running for Governor in the state of Georgia. Everyone else either slips my mind or comes out in an jumble of candidate names, none of which are the correct permutation. And while I typed in my co-worker’s information into the MVP website to discover that her registration was inactive, I felt a smidgen ashamed at my own ignorance.  You see, I fully plan on voting. When she asked me how did I know who to vote for, I brushed it off and said, “I’ll study up before I go.” You know how that goes.  Spend a few days on the Internet gazing on Facebook and Pangea’s Garden, and before you know it, it’s the day before an election and I need names!  My “studying” feels more like cramming. 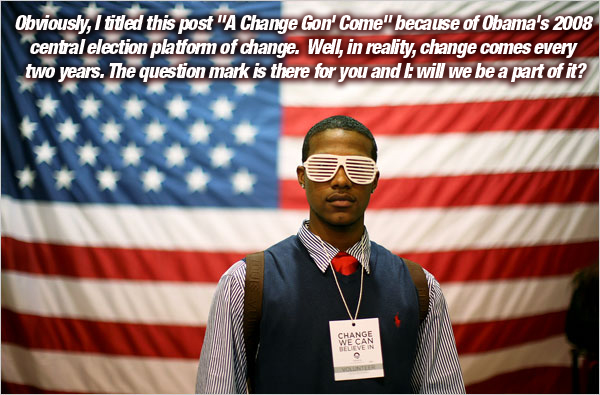 But I’ma need to remind myself to stop treating people who change my taxes, my MARTA, my streets, my city zoning, my future kids’ school districts, my utilities and my civil liberties less like a professor who gives me a grade I won’t care about next year.

Obviously, I titled this post “A Change Gon’ Come” because of Obama’s 2008 central election platform of change.  Well, in reality, change comes every two years. The question mark is there for you and I: will we be a part of it?

If you’re registered, please find out your polling station

and go vote on November 2th!  Change is an ACTION verb.