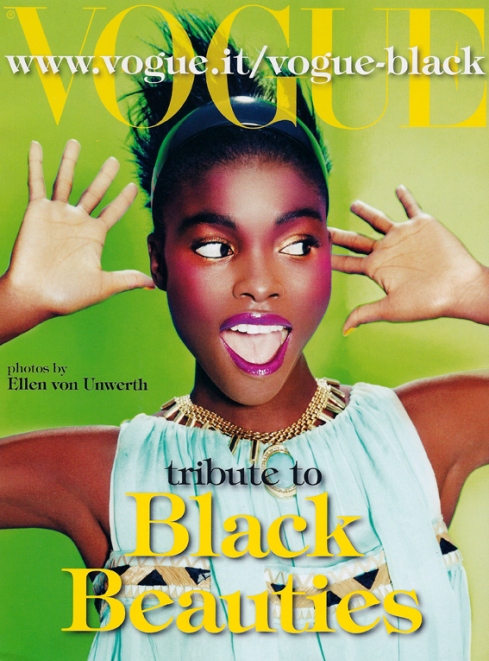 Claire Sulmers, Editor and Chief of Fashionbombdaily.com, who crafted the article for the feature had this to say: “With bright eyes peering out under deliciously curled lashes, cheekbones and jawbones contoured as if chiseled from sharp stone, full noses, and sumptuously lush lips, black women are unquestionably beautiful.

“A tribute is due to the woman whose skin tone ranges from alabaster to mahogany to smooth onyx, who can flawlessly carry any makeup look—from gold dusted lids to fuchsia blush to ripe purple and pink glosses. These pages pay homage to the versatile woman whose hair can oscillate from a tightly coiled and coifed Afro, to sleek layers, to a slicked back pixie cut in a matter of minutes. To the divine woman whose enviably full lips, strong, white teeth, and delightful smile have been known to electrify the hearts of many. To the siren whose smooth, velvety skin blocks the sun yet remains supple and unblemished with the passage of time.

Interesting commentary. We have a handful of the captures below. Please check out the whole story at Vogue Italia’s Tribute to Black Beauties.

Vogue Italia has a recent reputation for its recognition of Black Beauty in Fashion. Since it “All Black issue” of July 2008, it has followed up with its Black Barbie issue of July 2009 and more recently, with its February issue of the year with “The Black Allure,” which featured a 1920s retro style which lush and beautiful (if you haven’t seen it, we will feature some of the images and links here very soon.) Through these features, Italian Vogue appears to seek new and different ways of representing women of color, breaking down their own stereotypes and how to create captures of our sistas in an attempt to broaden their own aesthetic perspectives. And they appear to have succeeded.

So would the next step be to integrate the models of color into features with models who are not so colorful? What do you think?