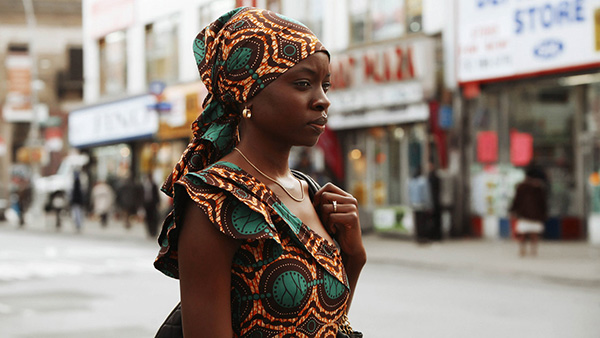 all content, unless noted otherwise is courtesy of Studio Africa

“Mother of George” almost never goes outside, and when it does it’s shocking that “outside” is New York City… it’s an exclusive gateway into a microcosm.

Mother of George is a 2013 Nigerian drama film directed by Andrew Dosunmu. The film, which premièred in the U.S. Dramatic Competition at the 2013 Sundance Film Festival, is the story of Adenike, played by Danai Gurira, who has come to the U.S. to join her fiancee Ayodele, played Isaach de Bankolé, a restaurant-owner in Brooklyn. Charting her shift from hopeful arrivant into a woman determined to hold on to the traditions and values of home by any means necessary, the film adds to a growing body of émigre stories by artists negotiating life in the U.S. 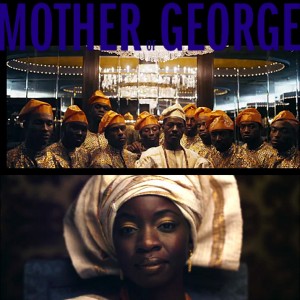 The film’s opening shots embed us in the exquisite detail and elaborate beauty of a Nigerian wedding in New York. Following the joyous celebration of the their wedding, complications arise out of their inability to conceive a child – a problem that devastates their family and defies cultural expectations, leading Adenike to make a shocking decision that could either save her family or destroy it. Acclaimed director Andrew Dosumnu (Restless City) captures the nuances of this unique and fascinating culture by creating a beautiful, vibrant, and moving portrait of a couple whose joys and struggles are at once intimate and universal. 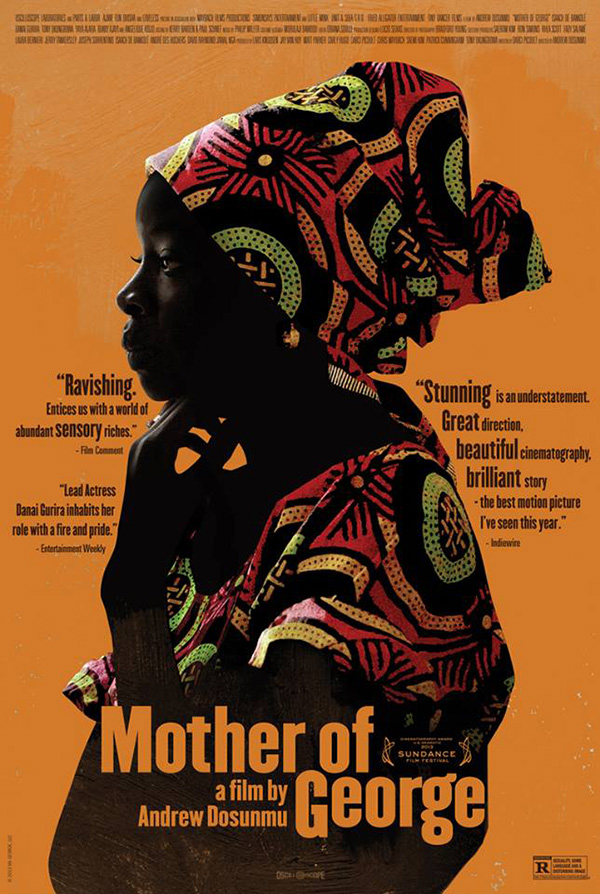 Jonathan Kiefer of SFWeekly had this to say about the film… 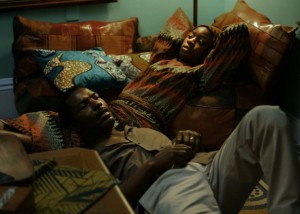 SFWeekly went on to say, “the movie seems so authentically Nigerian that it hovers perpetually on the verge of clunky Nollywood melodrama. Its story is quite direct… Darci Picoult‘s spare, sensitive script prioritizes muted intimacies, and Dosunmu’s airy pace allows for many fine nonverbal moments. Gurira smartly pushes back against the film’s tendency toward too-precious exoticism, and De Bankolé digs deep enough to get beyond his Jarmuschian cool. We’re warmly invited in to Adenike and Ayodele’s world, only to discover with a chill how difficult it is for them to live there — how displaced, for various reasons, they can’t help but feel.”

With cinematography by Sundance award-winning Bradford Young and styling by Mobolaji Dawodu,it goes without saying that Andrew Dosunmu‘s Mother of George is the most sumptuous film you’ll see this year. Although Dosunmu’s new film is more plot-driven than his first Restless City (2010), Mother of George is also impressionistic, privileging the power of gesture to tell a story. 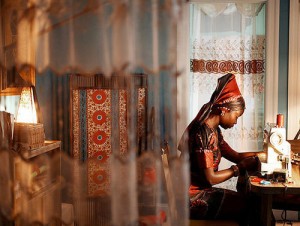 Matt Prigge of Metro.US  had this to say…

“Andrew Dosunmu’s atmospheric drama is set in Crown Heights, which, like many of Brooklyn’s neighborhoods, is both diverse and, for its individual groups, closed-off. The focus is a Nigerian community that has recreated a facsimile of home amid asphalt and tiny row home apartments. The majority of the film simply soaks up the feel of the place, its culture and its people — an otherworldly scene that could be charged with anthropological condescension were its maker not one of its own.” From his objectively critical viewpoint Prigge went on to say, “the gradual pacing, with scenes that stress the pace of chill human interaction over narrative thrust, helps make the third act more powerful… But Dosunmu is not a dramatist… Nevertheless, it’s closer to a great drama than it sometimes thinks it is.” 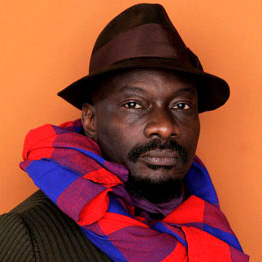 About Andrew Dosunmu
Andrew Dosunmu is a Nigerian photographer and filmmaker who came to prominence in The United States after directing music videos for various acclaimed artists including Isaac Hayes, Angie Stone, Common,Tracy Chapman, Wyclef Jean, Kelis, Aaron Neville, Talib Kweli and Maxwell.
He is the director of the 2011 drama film, Restless City which premiered at the 2011 Sundance Film Festival. His next film, 2013’s Mother of George, also premiered at Sundance, and was the Closing Night selection for Maryland Film Festival 2013. Dosunmu currently lives between New York and Lagos, Nigeria.
http://www.andrewdosunmu.com/

Studio Africa is a virtual loudspeaker for a new generation of creative talents from across the continent. The campaign features nine artists in fashion, film, music, literature, and photography; individuals with both talent and a deep commitment to their respective countries and people: Meet the catwalk model running a foundation for the education of orphaned girls in Tanzania; the actor creating opportunities for Senegal’s talibé beggar children; the fashion designer building an industry in Côte d’Ivoire one skilled worker at a time; the musician drawing on Belgian and Congolese roots to challenge what it means to make African music today; the writer from Morocco breaking taboos as the first openly gay author in the Arab world; and the photography collective showing their home-town of Soweto, South Africa in a whole new light.