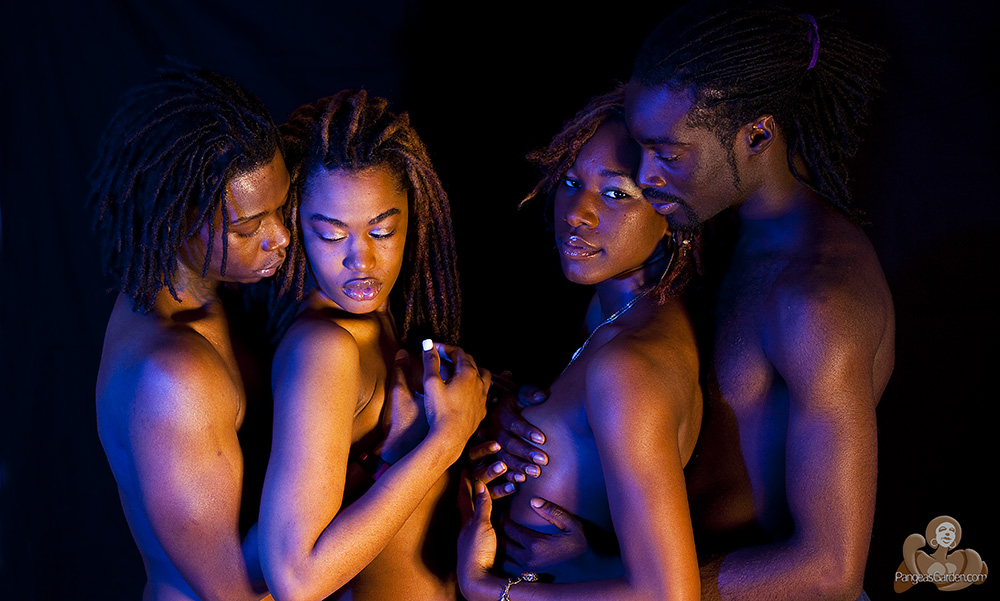 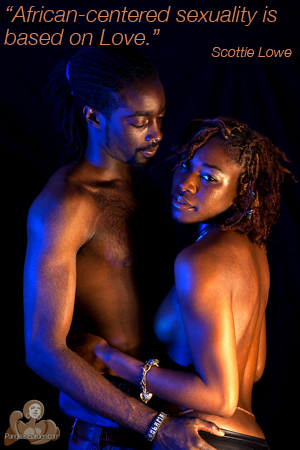 TheAfrican-centered community is steeped in sexual dysfunction. For all of our efforts to rid ourselves of European cultural, social, and spiritual norms, we have denied our sexual growth by blanketing everything under the assumption that anything other than heterosexual vaginal/penal intercourse is European and thus deemed “not African”. When the African-centered community discusses sexuality, they are most often satisfied with making uninformed references to ancient sacred sexual texts from the East and asserting that those texts were stolen from Africa. We are far from healthy when it comes to our perceptions of sexuality and we hold on to divisive, patriarchal, immature mindsets and defend them without seeking to expand our definitions, to redefine ourselves, to truly come to a place where we relinquish the shame and unhealthy belief systems we have been conditioned to accept.

I stand alone in my efforts to create an African-centered sexual paradigm whereby we transcend our repressive beliefs and are able to truly see ourselves as sexual beings without the fear, shame, or adherence to “rules” that are made up to feed fragile male egos. There is no true African-centered sexual theory. There are quite a few Afrocentric, homophobic, patriarchal men whose egos are so fragile that they have deemed that any discussion of sexuality is a threat to the Black community. There are scores of African-centered women who are taking back the power of their vaginas, who are coming to accept that their bodies are sacred temples and nurturing themselves, loving our menses, but that’s not addressing the issue of sexuality, that’s addressing the issue of gender. To address African-centered sexuality is to assert that our genitals give us pleasure, that we experience bliss in the throws of orgasm, that we have a sexual body just as we do mental, physical, spiritual, and etheric bodies as well. 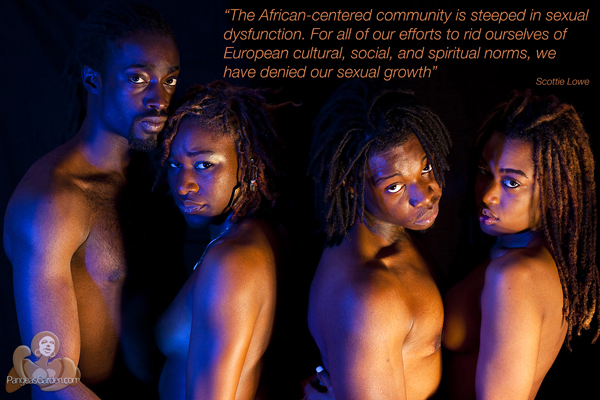 First and foremost, the discussion of sexuality, merely talking about sex, intimacy and acts of pleasure is essential for our growth.  We must discuss how our sexual identities were formed, we must discuss openly how we were raped, molested, abused, both men and women. We must be able to talk openly about our desires, fantasies, and what gives us pleasure. To asset that conversations of sexuality can’t be had in public forums, or that certain subject are off-limits is to assert that sexuality is something shameful and that is Eurocentric and unhealthy. Until we truly accept that our sexuality is a Divine gift, until we truly see our sexuality as something as natural and beautiful and not something to be compartmentalized or shrouded in secrecy, we will be tied to dysfunction.  We’ve been socialized to believe that sex is something that happens behind closed doors and even then it shouldn’t be discussed.

The tenants of African-centered sexuality stipulate that: 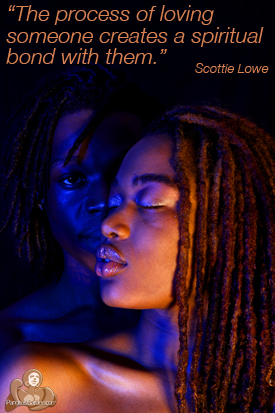 African-centered sexuality is based on Love. Not romantic love as is seen in Hollywood, not based on lust or what the other person can bring to you, but a true genuine affection, concern, and caring for one’s partner. The process of loving someone creates a spiritual bond with them.  Loving is the essence of our true nature as human beings.  Loving someone not only raises our vibration, but it also raises the vibration of the person we are with.  Because many of us raised in Western society have become so jaded by the concept of love, so hurt by someone we trusted with our hearths, we rally against it, claiming love has no role or purpose in the African-centered practices.  Nothing could be further from the truth.  To love someone is to care about their pleasure more than your own, to become aroused by their unique scent, to crave intimacy and connection with them.  Descendents of slaves are fragmented and disconnected from our emotional selves so the concept of loving someone arouses fear: fear of getting hurt, fear of being vulnerable, fears of abandonment and the fear of not being loved equally in return. The opposite of love is not hate, it is fear.  So, to form a bond with someone so intimately that you know them better than you know yourself is the primary goal of African-centered sexuality.  Love yourself, love your partner(s); make choices, conversations, and commitments based on the emotional and spiritual connection with the person(s) with whom you choose to share your sacred and sexual body.

Know yourself. African-centered sexuality is based on accepting one’s own desires, not condemning anyone else’s.  Every person is unique, what fits for one person is not going to be appropriate for all.  The African-centered individual can be comfortable and confident in knowing that they are secure in their own sexuality and that they are honoring their own natural drives and desires without having to diminish anyone else’s expression of sexuality.  The African-centered individual can respect that not everyone is at the same level of enlightenment and not feel the need to degrade, condemn, or criticize anyone else for where they are.  Know what arouses you, know what makes you orgasm, know how your body reacts to certain triggers. 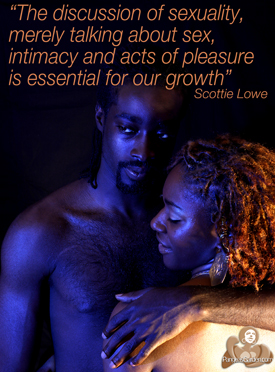 Sexuality is fluid – Gender is flexible. The African-centered community loves to assert that heterosexuality is the only acceptable form of sexual expression.  They love to assert that homosexuality is European and that indigenous Africans never practiced homosexuality.  They falsely and rather arrogantly assert that homosexuality doesn’t occur in nature.  The oldest depiction of a same sex coupling came from ancient KMT (Egypt) of Khnumhotep and Niankhkhnum.  There are at least 70 documented words in various African languages for men or women who engage in homosexual relations. There are also a variety of ways that African societies have historically tolerated or even celebrated the people who engaged in these practices.  Moreover, homosexual behavior has been documented in over 500 species of insects, vertebrae, birds, fish, and mammals including the African Elephant, Giraffe, Buffalo, Cheetah, and Zebra.  Homophobia is Eurocentric.  It is based on the fear of the men losing their masculinity, their fear of losing power over women, their fear of an equality of the sexes.  Heterosexism perpetuates a male-created myth of women being created for men to oppress.

African-centered sexuality asserts that the terms masculinity and femininity are Euro-defined concepts to perpetuate sexism and that connection between individuals, regardless of their gender, is perfectly normal and natural.  African-centered sexuality respects that couplings between a man and a woman are natural, predominant, and essential for reproduction but doesn’t negate or demonize other couplings that are not male/female.  African-centered sexuality acknowledges individuals who are transgendered, those possessing the physical, emotional, and sexual traits of both genders, are human beings equally deserving of love, passion, and pleasure and having a voice in the community just as much as those who identify as men or women.  Embrace, respect, honor, and celebrate inclusion rather than exclusion, diversity rather than uniformity, tolerance over narrow-mindedness. 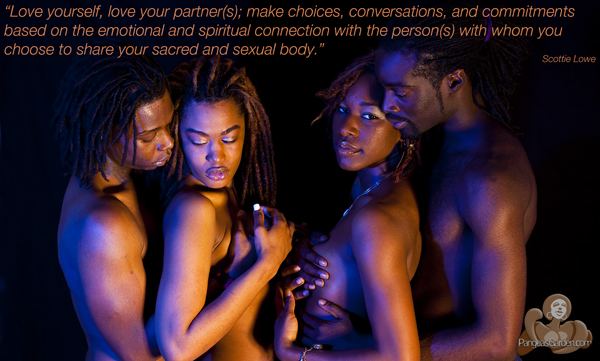