To Be a Black Feminist 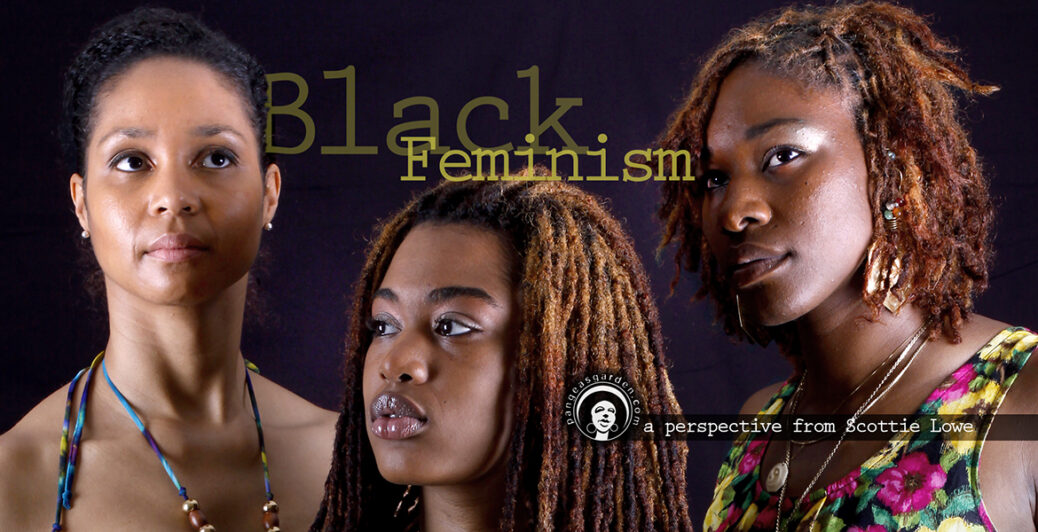 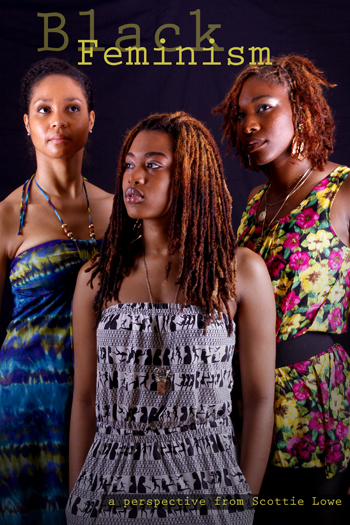 I recently read a deluded and sad “Letter to a Black Feminist” by a gentleman who blamed feminists for . . . well, basically, anything and everything he could think of. The fact that he didn’t even correctly identify what a feminist was or our real agendas didn’t seem to bother the numerous people who responded and told him how insightful and well thought out is misguided ramblings were. I am a feminist. I am an unapologetic Black feminist. I’m saddened by the lies, mistruths, and ignorance being perpetuated in my name and feel it’s my responsibility to share the truth for anyone who may be so inclined to learn and grow.

Here’s the Feminist Primer as simply as it can be explained.

Feminists work to dismantle the social, sexual, political, and economic disparity between the genders.

Feminists don’t want to be superior to men; we are not looking to replace patriarchy with matriarchy.

Feminists don’t want to emasculate men (although the concepts of masculinity and femininity are flawed, that’s besides the point). We have no agendas to make men more feminine but simply understand that there is a certain harmony and peace when masculine and feminine energies are in balance. 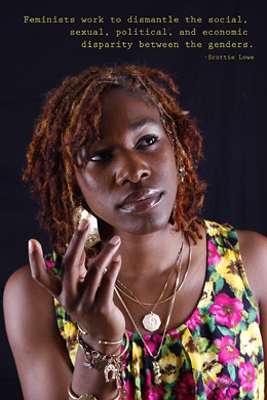 Feminists want to be seen as human beings, not objects, not submissives, not broken ribs or whatever fairy tales Black men want to quote to justify their insecurity with the concept that man and women should hold no power over each other.

Feminists aren’t lesbians, although we can be, but our sexual orientation has nothing whatsoever to do with our desire to fight the systems that keep women as second-class citizens.

Feminists don’t hate men although we certainly have a right to hate their privilege.

Feminists aren’t “against the family,” as so many Black men want to imply, we just don’t want the family to be based on a patriarchal model where men have the final say just because they have a Y chromosome.

Feminists simply take a stand against the oppression and tyranny of women under the false assumption of men being somehow inherently superior.

Feminists don’t want to be defined by how attractive we are to men but by our intellect, skills, talents, abilities, and our humanity. 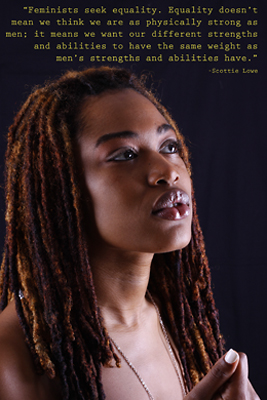 Black men are so terrified of being equal to women that they raise these absurd and paranoid rants against feminists in order to deflect from their own emotional immaturity. Black men are hysterical. They yell and scream about how they want an end to the fallacy of white male supremacy but they don’t want anything to do with the end of male supremacy, ESPECIALLY if it means they might lose their historically unearned place as leader, ruler, and so-called king. As long as Black men feel they have a right to oppress, subjugate, or dominate women because some white man wrote a book that said that God deemed that anyone with a penis has special privileges to view women as inferior, then black men will be forever handicapped by their own ignorance and arrogance. Emasculating or hating men has NEVER been the agenda of feminists, that’s nothing but bullshit rhetoric from immature and insecure men who want to keep women silenced and maintain their privilege of oppression. The very men who so vehemently hate feminists, who make us out to be evil estrogen wielding castrators, are the very men who are raping women, who are committing domestic violence, who are complacent when they see women being treated like whores and objects. Misogyny is a sickness within the Black community; it is a rampant disease that threatens our very existence. Until Black men can boldly declare that they are feminists, activists who fight for the equality of women, meaning they are willing to divest themselves of their unearned penal privilege and address how dysfunctional our society is in terms of gender, they will forever be emotionally handicapped oppressors. 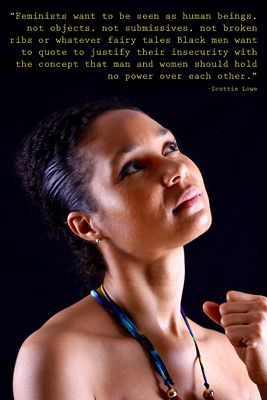 Black women aren’t much better. We have no clue what a feminist is other than what we hear Black men yell and scream, we are so conditioned to try to conform to Black men’s whims, fantasies, and irrational demands, that we never question anything they tell us and we go along with what they say. Black women can more easily define what a touchback in football is rather than correctly define the term feminist, even though one is meant to make them appear more attractive to men and the other benefits their status and standing as a woman in society. Of those who have a tiny clue what the word means, they inevitably say, “White women have commandeered the feminist movement for their own agenda so I consider myself a womanist.” Ask a Black woman, “What’s the difference between a feminist and a womanist?” “Well, a womanist is more concerned with Black issues.” Does that mean that we need to come up with a different name for Democrat since I’m more concerned with Black issues than white Democrats? “Well, a womanist is more concerned with the family.” Well, white women get married more than Black women so this Black womanist movement isn’t being particularly effective, is it? You lessen your position of power if you refuse to face Black men head on with their misogyny and you attempt to side step them by using a more neutral term that they don’t object to. You cannot be a warrior in the struggle if you are starting your crusade from a place of concession. If you refer to yourself as a womanist, you’ve already said to the world, “I don’t want to be equal to men because I don’t want them mad at me for being too radical.” Womanism is not the lite version of feminism, it’s not the Black version of feminism, it’s the patriarchal conformation to Black men’s insecurities.

If there was ever a platform upon which we could stand and unite, all men and women, it is the feminist one which states that we will be seen as human beings, no more, no less, that women serve a greater role in the world than doing housework and being receptacles for sperm to satisfy men’s lust. We are individuals with equal strengths to bring to the table as men. They are not the same strengths, but they are equal nonetheless. Just as left is not better than right, hot is not better than cold, up is not better than down, white is not better than black, let us all agree the man is not better than woman.

Scottie Lowe is the owner and founder of AfroerotiK. She creates erotica, for an about people of color, that shows us in a healthy, beautiful, sensual light that represent a broader view of Black life. You can follow her current writings on her blog at afroerotik.blogspot.com

These images were provided TCV Photography.