By ALEX WEST featured at TheSun.com.uk

HIP hop star Wyclef Jean told yesterday how he was shot in Haiti.

The Fugees frontman was campaigning in the troubled country for a pal standing in its presidential election. Wyclef’s hand was grazed by a bullet when he stepped out of a car to make a phone call. Describing the noise of shots Haiti-born Wyclef, 41, said: “I heard ‘blow, blow, blow’ and I looked down at my right hand.” 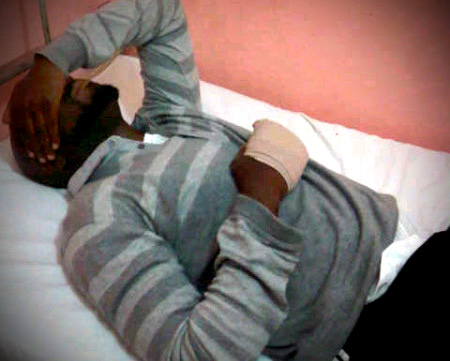 The US-based star said he had no idea who fired the shots or which direction they came from in the capital Port-au-Prince. He went to a local hospital – with blood on his shirt and shoes – and was released after treatment. Wyclef’s management assured worried fans on Twitter: “We have spoken to Wyclef, he is OK. Thank you for your thoughts and prayers.”

Wyclef was in his homeland to support the campaign by his musician pal Michel Martelly – a newcomer to politics who has a strong following among youth. Haiti’s 4.7million voters were choosing last night between Martelly and former first lady Mirlande Manigat, 70. 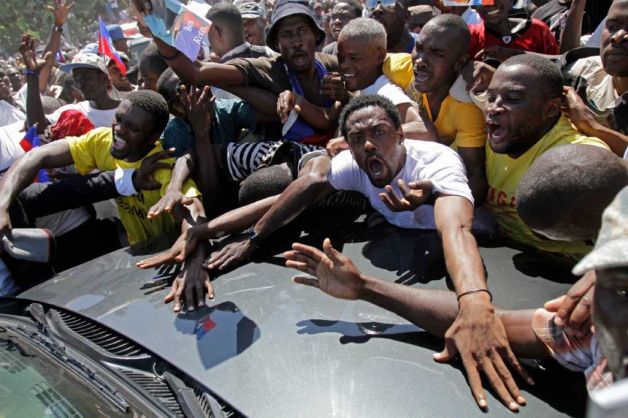 Supporters of Haiti's former President Jean-Bertrand Aristide surround his car as he arrives to his home in Port-au-Prince, Haiti, Friday March 18, 2011. Aristide, who was forced to flee Haiti due to a rebellion in 2004 aboard a U.S. plane, returned after seven years of exile in South Africa, days before Haiti's presidential runoff election Sunday. Photo: Dieu Nalio Chery / AP Read more: http://www.mysanantonio.com/news/article/Haiti-choosing-president-amid-uncertainty-anger-1210364.php#ixzz1HC26Xdf0

Sunday’s presidential run-off in Haiti had been billed as the most important in the country’s history. It came 14 months after the earthquake that devastated the capital Port-au-Prince, with international donors hesitating to fund crucial construction projects under the lame duck presidency of René Préval. The long run-up has had its share of drama: the return of two former rulers of the country, archenemies François “Baby Doc” Duvalier and Jean-Bertrand Aristide; a cholera outbreak; the disqualification of Préval’s anointed heir from the run-off. The two contenders on the ballot are interesting if not particularly inspiring: popular singer Michel “Sweet Mickey” Martelly, who was infamous for dropping his pants during performances, and constitutional law expert Mirlande Manigat, a former First Lady of Haiti.

There was anxiety, however, about fraud and violence. The first round of voting in January had been marred by allegations of vote-rigging in favor of Préval’s candidate. Three Manigat supporters had been shot while they were putting up posters of their candiate. And, during a rally in the central plateau city of Mirebalais, Martelly supporters threw stones at the 70-year-old Manigat while she was addressing a crowd. Then, on Saturday night, a report that Martelly supporter (and former presidential wannabe) Wyclef Jean had been shot sent alarms through the celebrity press — but the music superstar had received a minor wound in his hand and was not kept in the hospital. He had been grazed by a bullet fired at random off the streets of Port-au-Prince. No one appeared to know the identity of the shooter — or if Jean had been the target.

And so some Haitians approached March 20 with trepidation. At Cite Soleil, there was a hoard of voters crowded outside of an elementary school, skimming the printed registration list with their index fingers, waiting. Some had arrived as early as 6 a.m., which is when polls officially opened. But the United Nations peacekeeping forces (MINUSTAH) in charge of delivering election materials was late and voting didn’t get underway until a few hours later. Nonetheless, once the ballots arrived, the process proved orderly, though a few voters here and there could not find their names on the registration lists. 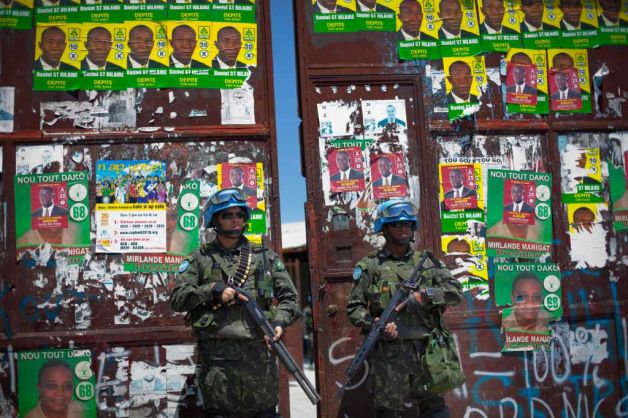 UN peacekeepers from Brazil stand guard at the gate of a polling station ahead of the second round of elections in Cite Soleil, Port-au-Prince, Haiti, Saturday March 19, 2011. Haiti will hold runoff elections on Sunday. Photo: Ramon Espinosa / AP Read more: http://www.mysanantonio.com/news/article/Haiti-choosing-president-amid-uncertainty-anger-1210364.php#ixzz1HC20arsT

And that seemed to be the atmosphere for most of the country. Radio reports from places like in the central plateau city of Hinche and the northern city of Port-De-Paix appeared to indicate that incidents of violence were minimal or non-existent. The streets of the capital Port-au-Prince exhibited a steady, calm flow of Sunday traffic.

Martelly handed in his ballot at the Lycee National in the suburban city of Petionville, where he has a strong, young following. Hundreds gathered outside the high school chanting the candidate’s name while Haitian police officers and MINUSTAH peace keepers set up barricades to contain the excitement. Meanwhile, in the Delmas 18 area of the capital, Manigat voted, dressed in her signature skirt-suit and pearls. If elected, she would be Haiti’s first elected female president. (Haiti’s first woman head of state was Chief Justice Ertha Pascal-Trouillot, who became the country’s provisional president after a 1990 coup d’etat.)

Recent polls showed that Martelly was ahead by a few percentage points but some observers believed that Aristide’s return might tip the vote in favor of whoever he seemed to like. However, Aristide, who remains popular among the poor, did not make any overt endorsement. Both Martelly and Manigat have had political differences with the controversial priest-turned-politician. There will be a long wait for a winner. Election preliminary returns are to be released on March 31 with the final results being published on April 16.

The first round of voting proved to be chaotic. Only 20% of Haiti’s 4.7 million eligible voters actually cast ballots — not because of a low turnout but because they were essentially disenfranchised. Polling agents turned away many voters because their names weren’t on registration lists, in part a legacy of the disarray resulting from the earthquake, in part the consequence of a traditionally inefficient voting system. 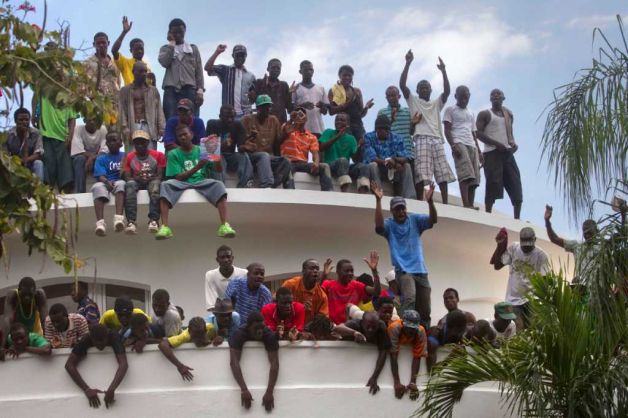 Supporters of Haiti's former President Jean-Bertrand Aristide gather at his home as he arrives in Port-au-Prince, Haiti, Friday March 18, 2011. Aristide, who was forced to flee Haiti due to a rebellion in 2004 aboard a U.S. plane, returned after seven years of exile in South Africa, days before Haiti's presidential runoff election Sunday. Photo: Ramon Espinosa / AP

U.N. Development Program Project Manger for Elections Lourdes Gonzalez says technical improvements have been made so voters can now find their polling stations. The Provisional Electoral Council (CEP) increased the capacity of their information call centers and provided more specific addresses of voting centers on its website. Also a new, telecommunication service allows Haitians to text their electoral identification number to a toll-free number and instantaneously receive a reply with their voting center location. According to Maarten Boute, CEO of the phone company Digicel Haiti, his firm received 125,000 of such texts a day. “I think this round is going to go better,” says Gonzalez. “There are of course elements that we cannot control but that’s the political context. At least we provided all the required support.”

Security is another matter. “When a gang of bandits attack a voting center, the supervisors can’t do anything. They aren’t armed and the bandits have guns,” says Louiner Jean-Marie, director of electoral operations for the CEP. “If the Haitian government doesn’t take the lead to guarantee security, MINUSTAH can’t intervene.” So far, however, reported incidents of voter intimidation have been low.

Fear of fraud is another factor. On hand for election day were 200 independent international observers from the Organization of American States (OAS). They have the task of monitoring more than 11,000 poling stations across the country. Voter fraud in previous elections have gotten people talking of a “rigged” election this time as well. In this round, Gonzalez says ballots which show irregularities will be handled by 16 lawyers hired by the CEP.
How is the bill for all this being handled? A total of $31 million was donated for the two rounds of voting: $15 million from the international donors; $16 million from the U.S. 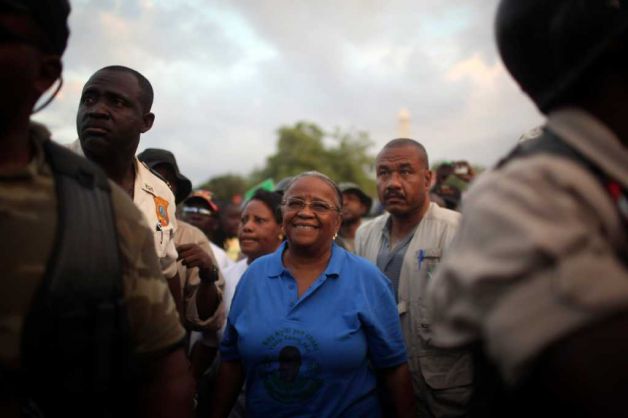