pangea, December 14, 2011December 24, 2011, Uncategorized, 1
Last month Erykah Badu participated in GQ’s Survivor series of interviews. In a feature by Sean Fennessey, Erykah spoke candidly her inspirations, her style, Flying Lotus and neo-soul. The following is an excerpt from that experience.
interview by SEAN FENNESSEY
images by MARK SELIGER

In the mid-’90s, a record executive named Kedar Massenburg coined the term “neo-soul” to describe a new breed of R&B artists—particularly D’Angelo, Maxwell, Lauryn Hill, and a certain head-wrapped chanteuse from Dallas—who defined the incense-fogged utopianism of the period. The name stuck, but Erykah Badu, now 40, never loved the label—fortunately she outlasted that moment in music. Or rather, she transcended it. First with the sultry, ballsy “Tyrone,” letting her freak flag fly both sonically and follicly, through more than a decade of jams, and into the future with her recent New AmErykah diptych. Badu talks here about growing up in Dallas, getting inspired by Steve Harvey, and learning to keep it real from Mahalia Jackson and her grandmother.

The Survivors: Erykah Badu from Gentlemans Quarterly on Vimeo.

GQ: What inspires you?
Erykah Badu: Artists need some kind of stimulating experience a lot of times, which crystallizes when you sing about it or paint it or sculpt it. You literally mold the experience the way you want. It’s therapy.

GQ: What was the experience that spawned your last two albums, New AmErykah Part One and Part Two?
Erykah Badu: I didn’t have a vision for it. I don’t think about that before I start writing. Not until a body of work starts to appear do I think about a concept for it. It’s usually not because of what I’m saying, it’s because of the frequency of the music—it all sounds right together, you know? Certain kinds of music make me write about a certain kind of thing. 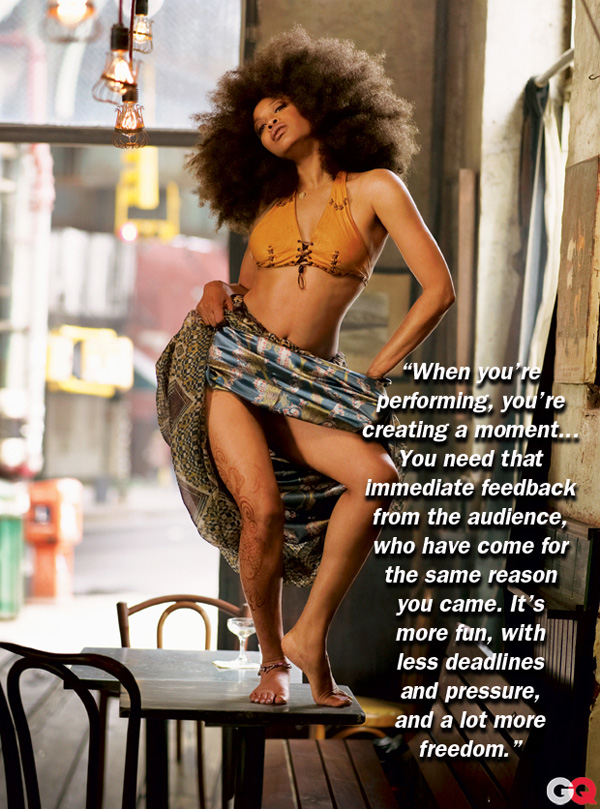 GQ: Back in 1997, there was a lot of attention being paid to neo-soul. Did you feel a part of that moment?
Erykah Badu: It was constructed outside of us. I think titles in music are mainly constructed to categorize things to sell units. If I can speak for a lot of artists who feel the same way I do, it doesn’t really matter. I don’t have one song that sounds like another one in my entire catalog. It only sounds alike because I’m present in all of it.

GQ: Your style is like nobody else. Where did that come from?
Erykah Badu: That’s just what I was. That’s what I love about Kedar: He didn’t say anything about that. I felt embraced by him. It just so happens that it was something fresh to people. I try to keep it fresh, you know? I enjoy it. It’s art, for me. It’s a functional art.

GQ: What’s next thing for you?
Erykah Badu: I’m recording an album right now, with [experimental music producer] Flying Lotus. I’m touring. But things are slowing down now ’cause my children are in school again. [Badu has three children: a son with Andre 3000; a daughter with rapper the D.O.C.; and a daughter with rapper Jay Electronica.] This is the time of year when we all nest in our little home in Dallas and cook breakfast and all those things we been doin’ on tour, just in one place. I’m kind of a recluse when it comes to going outside.

GQ: How did you and Flying Lotus hook up?
Erykah Badu: We were talking to each other on MySpace years ago when MySpace was a thing. Social networking was how we hooked up. I told him I’d be in L.A. and he came over to Steve Wilson’s house—Stevie is a psychedelic guitar player, a great musician. If both of our worlds can meet and we feel good about it, it’s going to be something dope. 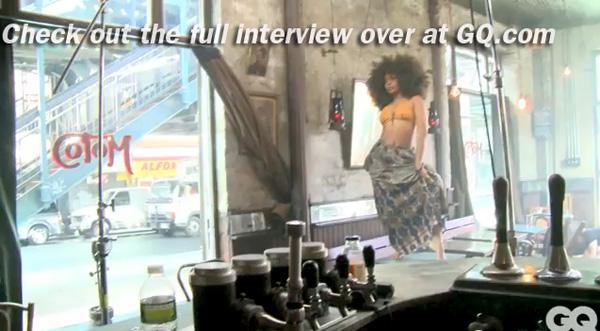