vincent, November 3, 2012November 3, 2012, Uncategorized, 0
Last Friday [10/12/12] night I went to check the Needle To The Record DJ Competition over at the A3C Hip Hop  Festival at Masquerade. When I got to Masquerade I went to check out the festival before I went in to the Needle To The Record  part. I caught the very tail end of the Wu Tang  performance, then I went upstairs to the Red Bull stage checked out a performance for a quick second , then I went downstairs to and got situated for the competition. The special guest judges for the evening were Dj Swiftee and Presyce , and were were treated to have Hip Hop legends Kool Dj Red Alert , and Teddy Tedd , and hosted by Ms. Dia from WRFG . It was a quick simple format , 6 Dj’s with one shot to show their skills. 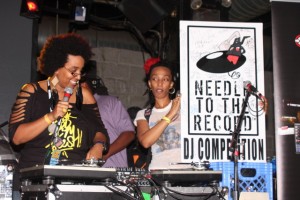 The first two that were up was Dj Logic , and Dj Aquaria the only woman in the competition. Then next up was Boi Jeanius and Dj Azul . And the last two were Dj Razah and Dj Flipflop. Between the Dj sets Dj Cha Cha Jones kept the crowd into the party with her selections , then Dj Shiftee, 2009 DMC Champion and King James, 2011 Needle To The Record Champion gave a turntable performance . Then it was time to crown the winner of the competition and Dj Flipflop was crowned the winner of the Needle To The Record competition. And he won a bunch of cool gear from Native Instruments .  And Dj Ghost came on to close the night out, I had a good time that night at the competition and the festival, but enough of me lets see the pics.

John is a cultivator in the Garden with an eye for the events in the Atlanta area. You can see even MORE of his captures from this event and many more by clicking on the banner below. We have upcoming events on the calendar page here on the site BUT WE NEED TO HEAR FROM YOU ABOUT THE COOL ONES  IN YOUR AREA!!!!. We are also looking for captures of events throughout the Afrosensual Diaspora! If you have them lets share them! Email us at udou@pangeasgarden.com