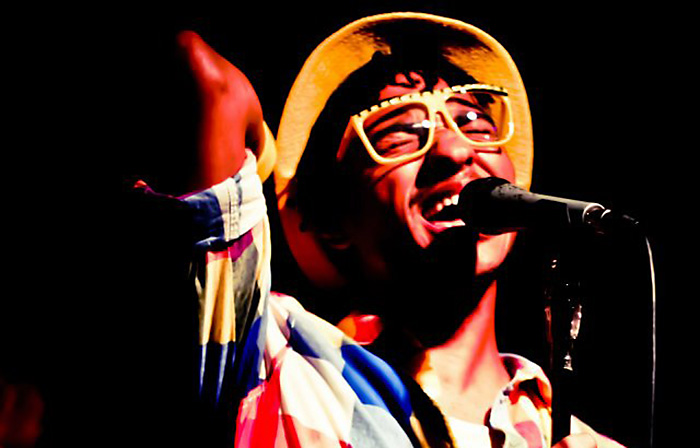 Durand Bernarr. Etch the name into your memory.

I first wrote about him here (shoutout to eclectic alexandria – I discovered him through her tumblr), and since then I’ve fallen deeper in love with his work, his growth and that voice. I’m not alone. Just ask his 11,000 + Twitter followers. His talent’s even led him to being mentored by Erykah Badu, who he’s been touring with as part of her band for some time now. And he’s been taking notes.

I call him “THE Voice” because there isn’t a single one out there like his. His range, emotional impact and clarity is beyond. Just “beyond.” That’s the only word that I can use to describe it. He matches that skill with lyrics that are deeply personal, arrangements that are always surprising, a sense of humor that will keep you in stitches, and homemade YouTube videos that are distinctly “Durand.”

This only child hails from Cleveland, and at a whopping 24 years of age, he has solidified his place in my heart and mind as the future of soul. The voice. The Durand. I’m not afraid to make this claim now. This is how he good he is at 24 (the voice doesn’t stop maturing until 35). Without formal vocal training:

Now, I’m just getting warmed up. Durand’s Badu covers are what brought him to the internet soulsphere’s attention. [Sidebar: I think I’m going to try to make “internet soulsphere” a thing… No? Ok, well just this one time.] Without a doubt, “Dear Outkast, Sincerely Erykah” is my favorite. It’s a mashup of all of her features on Outkast’s songs, plus a little bit of “That Hump” from New Amerykah Part 1. Listen:

He takes me there every time I hear this song. And on top of the vocal prowess, he’s got a great ear for tracks as well. He’s able to tackle jazz, traditional R&B, pop and electrosoul rather fluently.

Now, Durand isn’t all about covers. He has his own, original music as well. Check out “Risk,” a standout on his latest release, 80’s Baby:

I believe every bit of what he’s saying, and, most importantly, I relate. He hits you riiiight there – where you can really feel it. This emotive impact is buoyed by his one-of-a-kind, only-child-meets-drama-kid personality. His YouTube channels are a rabbit hole of sangin’, heartfelt testimony and hilarity.

Wanna hear more? Yes. You do. Check out “Sucker,” a short and sweet little ditty from Sometime in December, 1987. Listen to how he lets the vocals build into a glorious blend of soft harmonies over the stark, industrial track:

We can be more than friends, but less than lovers.

Lyrics, folks. He’s got ’em. I think there’s a lot of room for growth, but make no mistake, Durand has the emotional depth and command of language to write timeless classics. Just wait. Mark my words.

I know I gush about a lot of stuff on Soundcheck. That’s my mission. To bring y’all the music that I’m passionate about. Most of those artists are independent and underrated. Durand is a young man with an already astounding talent and immense opportunity to evolve and continue to make our jaws drop, hearts ache and sides split. Most importantly, he is himself. Making music and homemade videos in his room. That’s brave, honest, and endearing, and it’s a joy to watch his dreams come true.

There is no other artist who I am rooting for more than him. He occupies a special place, and will rank as one of the greatest vocalists of this generation. I am not claiming that in hopes that it’ll come true. I’m telling you because it’s going to happen. I had the pleasure of meeting him and seeing him perform one night at Apache in Atlanta, and the stage is his. It is where he belongs. Other singers tore the house down that night, but Durand teleported us.

For further proof that he was born to do this, watch his video series on how he met Erykah Badu. It’s a great story that also gives background into how he got to where he is now. And to add to the magic of it all, KING was also there. I’m trying to tell y’all something very special is happening here. Pay attention.

It’s a great time to be a Durand fan. He’s all over the internet, but I recommend you start with his website , and follow the yellow sunglasses (his signature accessory) on the right-hand side to his various pages. Download his music, support him, and tell your friends.