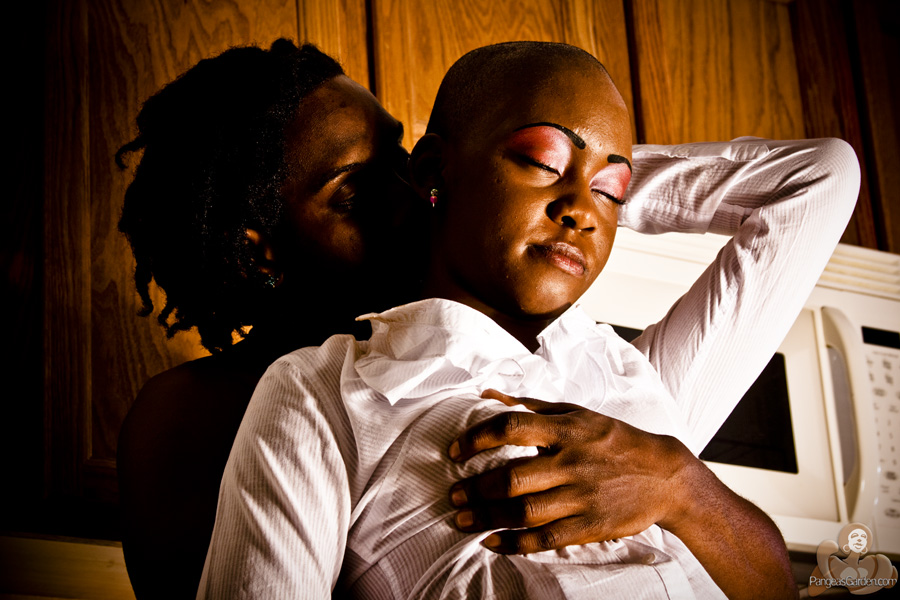 Part one of an AfroerotiK romance

My entire relationship with Charles, what little there was of it, consisted of countless opportunities for emotional growth and never-ending nights of frustration.  We hadn’t been dating long, only a few months, but our liaison was defined by what seemed to be an endless supply of patience on Charles’ part and innumerable occasions for me to redefine myself anew.  Unfortunately, I am plagued with a biological preponderance for self-doubt which he was challenging me to face head on.  My mother hadn’t bonded with me during her pregnancy thus I was left challenged to form healthy, loving relationships as an adult.  My brain had been wired differently in the womb than most people’s, my subconscious mind operated under the assumption that I was inherently unlovable and intrinsically without value despite how much work I’d done on myself, no matter how many rituals I’d performed, regardless of how many pages I’d written in my journal or affirmations I’d recited in the mirror, even in spite of how wonderful I believed myself to be in my heart.  I’d taken tremendous strides toward healing and I had shown marked improvement and I was more than willing to exert the effort needed for me to tackle the internal demons that had been preventing me from attracting someone who was capable of loving me unconditionally. 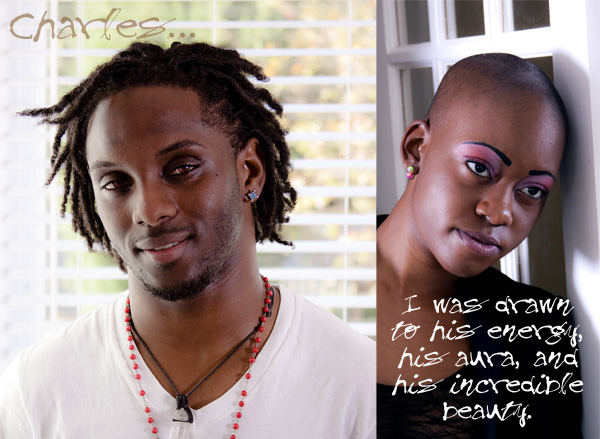 Apparently, I was doing something right, because I had attracted this amazing, enlightened man of my dreams into my life.  So while I didn’t entirely feel worthy of his love, I knew in my heart and in my soul that I was divinely worthy of a love that was greater than my mind could imagine and Charles was intent on proving to me that he wanted to give me every bit of his love.  From the moment we met, from the moment I laid eyes on him, I was drawn to his energy, his aura, and his incredible beauty.  Initially, in his presence, I felt like he was going to reject me at any moment; I felt like he would prefer someone with a name like Ausar Nut Ma’at Imhotep, who wore locs and constantly smelled of patchouli oil, and who carried around incense and shea butter in the red, black, and green backpack that she had crocheted by hand.  I just knew in my heart that he could never really love a woman who wrote about sex and sexuality and whose opinions on race and gender were so outside the norm, who loved wearing high heels occasionally, and who showed signs of insecurity and doubt openly.   Luckily, I was wrong.  He saw me as infinitely talented, grounded, inspired, and beautiful and he felt the pull of my African centered consciousness and saw my ability to free the descendents of slaves from our mental and psychological bondage with my words. 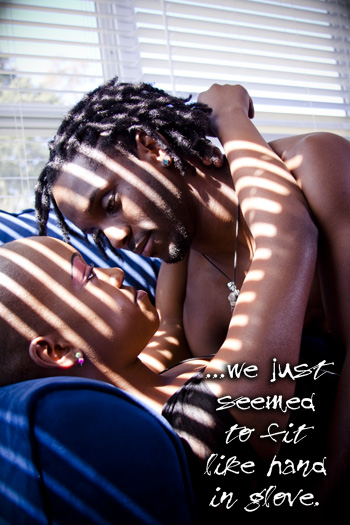 We vibrated on the same level in so many ways.  While not identical in our every thought, we shared similar master numerological energies, spiritual outlooks, and interests.  There was something very holistic and organic about what we shared and he was more than willing to nurture and heal my soul and that meant more to me than anything else.  Our masculine and feminine energies complimented one another and we just seemed to fit like hand in glove.

For weeks, we grew together.  Our days were filled toiling in the earth, growing vegetables, expanding our consciousness academically and culturally.  We were always preparing food together as we were both dedicated to a living and raw diet and we even fasted together as well.  He pushed me to trust him, to trust that he loved me, to see myself as the special and unique being he saw me as.  I met each challenge he gave me head on, never afraid to push myself.  Much of our time was spent in meditation or doing ritual.  Sometimes we sat in silence, other times would laugh, talk, and listen to music until the early hours of the morning.  I loved that he never made me feel like a victim or try to pity me because I was going blind.  Charles would use his inspired words to paint pictures so I could see through his eyes and he helped me work out how to get around my apartment with my eyes closed for when the day would come when I had no sight at all.  In every way imaginable, he was there for me like no other man had ever been there before and I found myself in falling in love with him in ways that were more profound than I had ever thought possible. 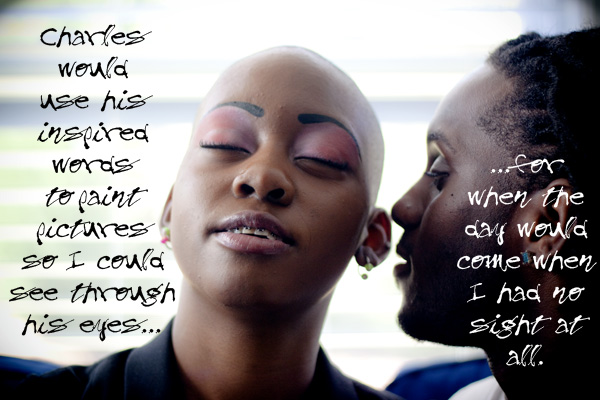 At times, our evenings were simmering, smoldering, and steamy, building a raging inferno of sexual tension between us.  He seemed to know how to get me to the edge of explosion without any direct stimulation of my special places.  He could whisper in my ear, telling me all the things he wanted to do to me, describing his fantasies about me in poetic, glorious detail and I would melt.  He had the ability to lay his body on mine, I could feel his erection, engorged and rock hard grinding against me, and I could detect his unbridled passion, his intense desire to be inside me.  His energy was strong and I would arch my back and wrap my legs around him as we kissed, hoping against hope that he would cross the threshold into my sacred space without my verbal consent.  My hardened nipples would ache for his mouth to devour them and my swollen, wet pussy throbbed with anticipation and delicious expectation of his penetration.  I’ll be the first to admit that when things would get hot and I was on the brink of erotic surrender, I would sometimes freeze up and ask him to stop.  It had nothing to do with him.  I was letting old tapes play in my head about being used, about men in my past who didn’t mind sexing me up but didn’t want a relationship with me.  Charles wanted our lovemaking to be unfettered by fear or negativity; I didn’t want to have any emotional blocks between us.  And we both wanted us to join in a union of transcendent, unparalleled ecstasy so we waited until the time was right. 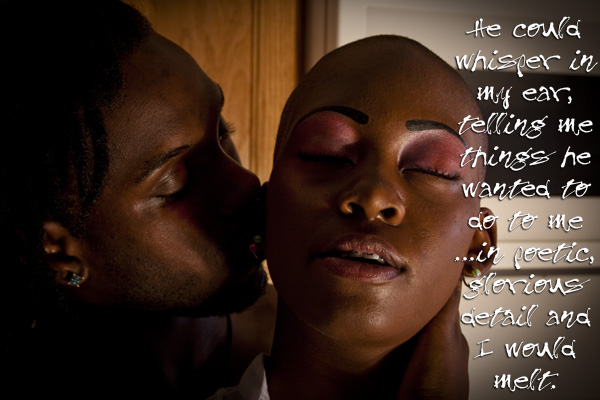 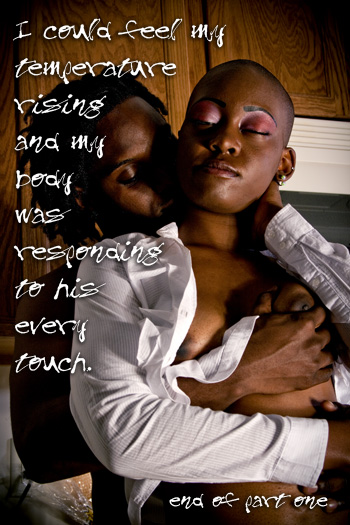 Other times, the subject of sexuality never entered our evening experience.  Sometimes, I could sense that I shouldn’t initiate anything romantic or sexual between us because he was at his very limit for frustration.  I would hug him and he would give me a look letting me know that I needed to back off.  On those nights, after we would part, I would lie in bed alone, pleasuring myself, wanting to call him to me and invite him to be my lover.  When I showered, my fingers would find the slippery folds of my pussy and rub my clit and I would imagine him thrusting deeply inside me, completing me.  I imagined him, at home alone, white cotton sheets covering his nude body, his erection tenting the covers, a sheen of perspiration covering his lean frame as he lay tortured, frustrated and aroused, thinking of me.

Our dance of frustration came to a screeching halt one night without much fanfare or preparation.  We were fixing dinner one night and I was standing at the sink washing up a few dishes as he was moving around the kitchen doing his thing.  I felt him slide up behind me, placing his arms on the counter beside me, his lips brushing the nape of my neck.  He used his body to push me against the counter and I could feel the evidence of his erection against my backside.  Instinctively, I pushed back, grinding the soft, full curves of my ass against him, leaning my body back and luxuriating in his hands caressing my waist and his nibbles to my earlobe.  I could feel my temperature rising and my body was responding to his every touch.

End of Part One 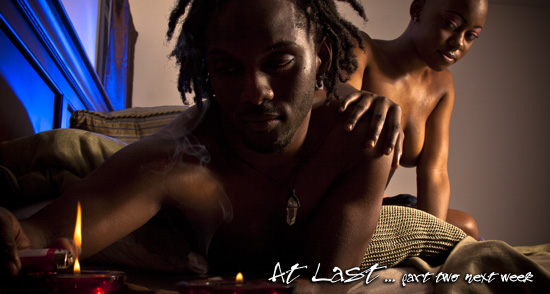